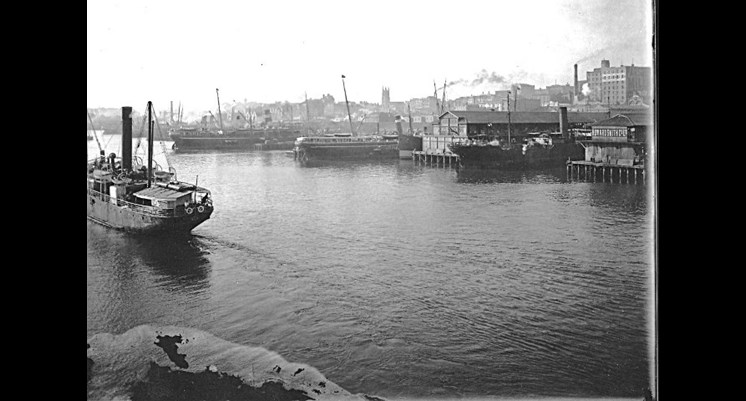 Sydney’s natural harbour and dependable water supply from the Tank Stream drew Britain's Captain Arthur Phillip to disembark his First Fleet party of 1,500 mostly convicts at Sydney Cove in 1788. Sydney was established as a penal settlement.

The beauty and potential of Sydney Harbour (also known as Port Jackson) has since attracted settlers, traders, visitors and business people whose energy, innovation and vision contributed to the city's growth.

The history of port management in New South Wales dates back as far as 1811 when the first Harbour Master was appointed to control the Port of Sydney.

Throughout the 1800s, Sydney's wharves were privately owned and their ramshackle development contributed to the outbreak in 1900 of bubonic plague. The Sydney Harbour Trust was formed in 1901 to take over and develop the wharves. These arrangements continued until 1936 when the Maritime Services Board (MSB) was established to coordinate, under one authority, all port and navigation services for NSW, with the exception of Port Kembla which came under MSB control in 1948.

During the 1960s, the MSB embarked on a ten-year plan to redevelop Darling Harbour. With the growth of container trade making increasing demands on wharf space and facilities, the MSB commenced feasibility studies on the development of Botany Bay.

Construction of Port Botany began in 1971 and the facility opened in December 1979. The port is now the site of Sydney's three major stevedoring and two bulk liquid facilities.

Sydney Ports Corporation was established in 1995 after a series of reforms to the MSB, allowing the new, State-owned corporation to take a greater commercial and customer focused approach to the management of international shipping.

The MSB was abolished under the Port Corporations and Waterways Management Act 1955, now known as the Ports and Maritime Administration Act 1995 bringing an end to a chapter in the history of Sydney Harbour and other New South Wales' ports.

The change resulted in the formation of three individual State-owned port corporations at Newcastle, Port Kembla and Sydney (Sydney Harbour and Port Botany).

Following the restructure and amalgamation of the state's transport authorities in 2011 (NSW Maritime and the Roads and Traffic Authority), the Government transferred the management of the ports of Eden and Yamba to Sydney Ports Corporation from 1 December 2011.

The Port Botany transaction also saw the transfer of the Enfield and Cooks River logistics sites with Sydney Ports retaining ownership of the ports of Eden and Yamba.

Port Authority of New South Wales was established in July 2014 with the amalgamation of the Sydney, Newcastle and Port Kembla port corporations.

The amalgamation followed the long-term leasing by the NSW Government of each corporation's landside operations - Sydney and Port Kembla in 2013 and Newcastle in 2014.