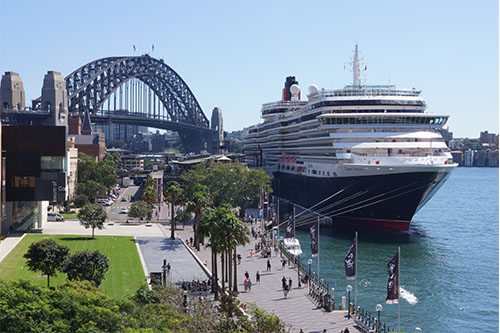 New South Wales has had another record year as 352 cruise ships visited Sydney during the 2017-18 cruise season, bringing almost 1.6 million passengers through Sydney’s cruise terminals — an increase from 344 ships and 1.53 million passengers from the year before.

The record-breaking number of ships included seven maiden visits and comes as Sydney is named the top-rated port in Australia and New Zealand in the 2018 Cruisers’ Choice Destinations Awards. The popularity of cruising wasn’t just limited to Sydney either, with regional cruise in New South Wales showing continued signs of growth. Newcastle Harbour welcomed 11 cruise ships during the 2017-18 cruise season, up from five the year before, while 15 ships visited the Port of Eden, an increase from 14 last year.

Port Kembla, which welcomed its first ever cruise ship in the 2016-17 season, continued to make its mark on the cruise industry with a further two ships calling into port this year.

Other highlights for the New South Wales 2017-18 cruise season include:

Airport check-in service launched at Sydney’s cruise terminals
A new initiative between Port Authority, Virgin Australia and OACIS was launched at the Overseas Passenger Terminal and White Bay Cruise Terminal in December. Using OACIS’ innovative mobile check-in system, cruise passengers can check-in to their Virgin flight, get their boarding pass and have their luggage transferred straight to Sydney Airport. By the end of the cruise season, 6000 passengers took advantage of the system. New cruise terminal videos released
In December 2017, Port Authority released two new videos to guide passengers through the check-in process at both the White Bay Cruise Terminal and the Overseas Passenger Terminal. Since the two videos were released more than 13,000 cruise passengers have viewed them.

Biggest ever cruise ship for Port of Eden
On 15 December 2017, the 93,000-tonne Norwegian Jewel made its maiden call to Port of Eden carrying over 2000 passengers. It was one of five cruise ships that visited Eden during December bringing thousands of domestic and international passengers to the town.

Eden’s new and improved wharf is on the way
In April, construction began on the NSW Government’s $44million Eden Breakwater Wharf Extension project to extend Eden’s wharf so that cruise ships over 300m in length will be able to berth in Snug Cove for the first time. Image: Eden welcomed in a record 15 ships over the cruise season

Across the world, 26.7 million people took a cruise in 2017 and Australia maintains its position as the cruise market with the highest cruising population in the world. The CLIA report shows that the Australian cruise market grew by 4.4 per cent in 2017.